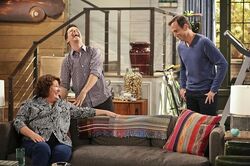 Carol begins her search for a new apartment, causing Nathan and Debbie to race each other to find her a place that is the farthest away from each of them. During the course of her house-hunting, Carol meets and develops an instant bond with Kip Finkle.

Retrieved from "https://themillers.fandom.com/wiki/Movin%27_Out_(Carol%27s_Song)?oldid=4693"
Community content is available under CC-BY-SA unless otherwise noted.