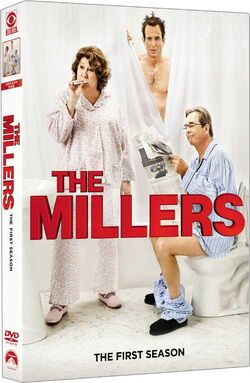 Nathan and Debbie's parents Tom and Carol Miller are returning from Myrtle Beach and Nathan informs them he has divorced his wife, Janice. Tom responds by deciding to leave Carol after being married for forty-three years. Tom moves in with Debbie and Adam while Carol moves in with Nathan, each driving their children crazy.

On January 18, 2013, CBS placed a pilot order, under the title Unauthorized Greg Garcia Pilot. The pilot was written by Greg Garcia and directed by James Burrows.

Casting announcements began in February 2013, with Will Arnett first cast in the lead role of Nathan Miller, a recently-divorced man whose life is complicated when his parents decide to move in with him. Arnett originally booked the role in second position to Up All Night, whose future was uncertain at the time. Margo Martindale was the next actor cast, in the series regular role of Carol Miller, Nathan's vibrant but meddlesome mother. J. B. Smoove then joined the series as Ray, Nathan's good friend and cameraman. Shortly after, Mary Elizabeth Ellis signed onto the role of Debbie, Nathan's happily-married sister. In early March, Beau Bridges joined the series as Tom Miller, Nathan's father, who moves in with Debbie. Michael Rapaport was the last actor to sign onto the series, in the role of Adam, Debbie's husband.

On May 10, 2013, CBS placed a series order, under the new title The Millers. Shortly after the series order, Mary Elizabeth Ellis and Michael Rapaport exited the roles of Debbie and Adam. A couple months later, Jayma Mays and Nelson Franklin were cast in the two vacated roles.

Retrieved from "https://themillers.fandom.com/wiki/Season_1?oldid=4617"
Community content is available under CC-BY-SA unless otherwise noted.